Duane Pitre interview for 06:00 am

Surely there isn’t just one reason why. But one is that I find it to be a form of therapy for myself...and hopefully it can serve this purpose for others listening to my work. Another “reason,” one that is particularly interesting to me, and this is something I came to realize a few years ago, is that I believe I make music (in part) to continue the quest to find out why it is I need to make music, it’s like a loop of some sort. Maybe one day I’ll find out and I’ll start making something else…

06. What is it that makes you constantly create?

Likely the will to stay sane and/or to experience the feeling I get when creating something special (to me), which is a constant search.

06. One injustice you can't accept

Well it’s obviously really hard to pick just one. But I suppose one that is on my mind quite often, and it’s the reason I’ve self-studied world religion for many years now, is the injustice of people hating and hurting others based on their religion. The idea of hating/hurting another being because they believe a different set of abstract concepts than you do…well, it is mad.

06. In which neighborhood did you grow up? Can you describe it to us?

The city of New Orleans. It’s hot, humid, sticky, old (for the U.S.) and odd. For some things it is great, for others it is terrible. It’s like a balancing act living here again (I moved back 3 years ago, after being gone for 16 years).

06. It is our childhood that forms us?

I suppose it varies from person to person. I believe that if we cling to the child that we once were, it will stunt our growth (and I don’t mean physically). That said, I think there is a thread that runs through our entire lives.

06. Tell us of a motive that excites you.

I go back and forth on that one.

06. Which is the greatest pleasure in your life?

06. Tell us a phrase that drives you.

06. How much does the environment influence the root we finally take in life.

I can only speak for myself…but yes, I allow it to influence me as much as possible. Though I’ve been known to change my environment when it negatively impacts me (in some way) for too long, or if I’m getting too bored of my current environment I’ll want to move on. My environment has certainly had a big impact on my musical work over the past 5 years or so.

06. What was your parent's dream for you?

I’m not entirely sure. But I’d imagine they wanted me to do something where I gave 100%+ and could enjoy it while doing so. And I’ve done that my whole life, more or less.

06. What is, in your opinion, the biggest problem of the human kind.

06. What do you believe about the current economic crisis

The ”economy” is just another man-made abstract idea used to control…and it’s doing a job of that right now I ‘d say.

06. Do you have order and program or a kind of discipline in your life? Is this due to your mother or your father?

I do. I need structure in my life; though it cannot be too rigid…a semi-loose structure is best for me. I don’t believe I learned this from my parents, I think I created this “need” on my own.

06. Do you think that you can critique negatively the work of your friends?

Maybe this is what you are trying to say and it just is lost in translation…but I would give “constructive criticism” to a friend, if they asked this from me.

06. Do you think you can gain something from receiving negative criticism?

Again, if it were “constructive criticism,” then yes, I could gain something at times, which would be dependent on what the subject was (i.e. piece of music).

06. When do you believe that music took a central position in your life?

Probably in 1997; this was about the time when I stopped skateboarding professionally and my first band recorded an EP and went on tour.

To categorize perhaps? Categorization can be quite helpful. Like “Poison Mushrooms” for instance, we know not to eat those (or they can kill us) because they’ve been given the title “Poison.” So to create separation I suppose, for better or worse.

06. Do you have the tendency to work many hours without a break?

If life that day permits and the process is flowing, then I’ll work as long as possible. Though inevitably the dog will need to be walked at some point :)

06. What does your family say really about your music?

They’re stoked that I do it, that’s for sure. As far as if they actually like it…well I think it varies from piece-to-piece (of music) and from family member to family member.

If you are speaking of musical ideas, then they go through several stages of “natural selection.” First they’ll reside in my mind for a while, I let them stay there for some time (a “gestation period” if you will) to see if they are still appealing to me after a while. If they are, then there’s the question of “is this piece/project/etc feasible right now (financially, logistically, etc)” or “how will the idea be applied or carried out.”

The latter happened to me just recently, where I recorded some source material for a general idea of a piece, which I wasn’t exactly sure how it would be constructed (organizationally and technically). But I knew some way to realize the piece would eventually reveal itself, which it did, almost 3 months after recording the sounds. So having patience is part of my process, I work slowly so as to allow such things to work themselves out, instead of forcing/corralling them in some way that I think is “right” on one given day.

So if the idea is possible or I’ve figured out (or “it” has figured its own self out) how to realize it, then it’ll go to the experimenting stages, with the actual sound. If I’m pleased with how it sounds then it usually gets recorded, released or performed live (sometimes all three). Very few ideas of mine make it through all of this (to the final “selection”) though.

06. Can you send us a picture that best illustrates your current state of mind to post along with your answers? 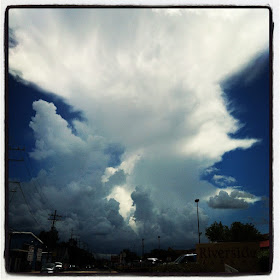