Robert Turman interview for 06:00 am

06: Do you make a living by making music and art?
RT: No, it would be nice to be able to live by it, but money shouldn't be the motivation.
06: Do you believe that art is done for others to experience or is it only for those who make it.
RT: Both. It can be exciting to create something that pleases me, but it's no good unless you put it out there.
06: Do you record at home?
RT: Yeah, I've always had just very minimal crude equipment, and only really feel comfortable in my own environment. I think it would be fairly stressful to be under pressure of time and engineers in a proper studio, unless there's an unlimited budget.

06: Which movies that you have seen in the past you like the most, and which recent movies do you like? Which directors do you love/admire?
RT: I don't really like talking about 'favorite' things, movies, music, books, etc. It's all very fleeting, I'm influenced by everything, whether I like it or not. If I name something, people think, "oh, he's into this, into that, etc", I like to keep people guessing.
06: Do you believe that knowledge is what motivates the human kind or all of the things that we do not know?
RT: Knowledge is just an illusion, to admit we know nothing is a good starting point.
06: Do you think that the world is changing?
RT: The world is changing but it will always be the same.
06: What do you think about the current situation of Europe?
RT: I miss Europe, I haven't been there in years, is something happening? is it a lot different than 20 years ago? or a lot different than the difference in the U.S. between now and then? I imagine it's about the same.

06: How did you end up writing Flux, 33 years ago?
RT: It was composed using a tape machine, xylophone, crude drum machine, and piano. I had become tired of the barrage of noise at the time, wanting a more pure sound. I usually get a drum or tape machine, or a loop going, and just play an instrument along with it, and see what happens.  As with most of my music, I did it to please myself, to have something to listen to.
06: How did your release in Spectrum Spools come about?
RT: There were some old copies of a rare version of Flux that had been stored away for years, and I sold them to Aaron Dilloway at Hanson Records. Aaron wanted to put it out but John Elliott (from Emeralds and Spectrum Spools) got one of those and really wanted to put out the LP and kinda took over the project. There was some confusion for awhile
because the master tape had been sent to England, he managed to get it back and had it expertly mastered by Rachad Becker in Germany.
06: How can a human being find its way in life?
RT: I'm still trying to figure that one out.

06: How do you feel that what you have discovered by practicing/rehearsing can finally become a record?
RT: After all these years, it's still kind of hard to believe. I don't really practice or rehearse anything, I just play what comes to mind.
06: Do you believe in the concept of revolution?
RT: Revolution implies going back to the beginning, although sometimes it might seem necessary, it doesn't do much good.
06: How was the environment that you grew up in? What was your parents occupation?
RT: Very normal, most people can't imagine. My father was a furniture dealer and clockmaker, my mother a homemaker.
06: Are there people you remember clearly because they made your way easier in life?
RT: My parents, I guess, human babies don't do well on their own.
06: What instruments did you learn to play? Define your music in relation to the word "instrumental".
RT: I started playing guitar in the early 60s, but mostly considered myself a bass player, but I'll play just about any instrument to varying degrees. My music is instrumental
in the fact that there are no actual vocals, because it's mostly music and not songs, although I have recorded pop songs.

06: What is your definition of "pop"?
RT: 'Pop' means popular, but I suppose there's been a lot of music I might consider to be pop, that wasn't popular. I've always liked a lot of pop music, and of course, a lot I
haven't liked. I suppose a good definition is something catchy, and a song as opposed to music, and something that can appeal to a lot of people.
06: When did you first get exposed to dub? Can you describe the experience?
RT: Mid to late 70s I guess, discovered reggae, one thing lead to another and started listening to dub music - it was spacier, more sound oriented, but the technique did
influence a lot of my music over the years.
06: Can you send us a picture of you that best describes your current state of mind so that we post it along with your answers?
RT: 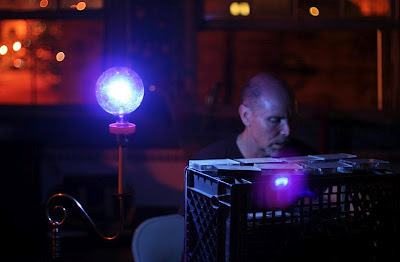