Holly Herndon interview for 06:00 am 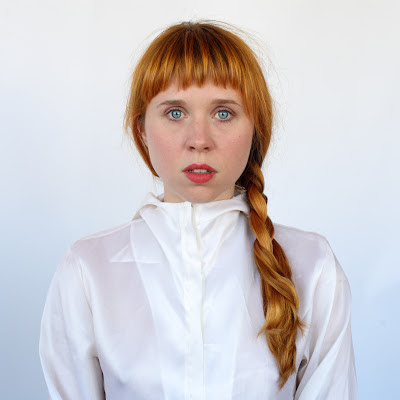 06: Let us talk a bit about your future contribution with a book on the embodiment in electronic music performance. An image comes to memory of two people 'performing' but instead of laptops they have open pizza boxes. Would you like to introduce us to what has been a main focus on your practice and thinking?


I’m a little confused and intrigued by the pizza reference, you will have to explain that one further! As far as embodied electronic music performance goes, I chose this as my master thesis topic while I was studying at Mills College. I wanted to get to the crux of what makes a performance embodied, because I simply did not accept that acoustic instruments were any more natural or embodied than electronic instruments. Since then, the conversation has been more directed toward the laptop as an instrument, which is my primary instrument. It is a problematic performance instrument for many people, so I try to address that in both my performance and in discourse.

06: What is there in between a human body and “its” voice?

I don’t think there is anything “in between” the human body and the voice, I think it is a continuation. This is exactly why the voice is such a compelling way to incorporate the body with what are sometimes seen as disembodied or alien technologies.

06:What would you like your audience in a performance of yours to deforest and enjoy?
What role does the audience play during your entire creative process?

I want them to be aware of themselves in the shared time/space of the performance. There is certainly a physicality to the music, I use a lot of bass frequencies, etc. While there are some moments of suspended reality, I tend to shy away from complete abandon. I don’t try to create a mystical immersive environment, rather, I try to inhabit the same time and space as the audience and hope ppl are aware of their bodies as a part of that.

06:What is more important for your music, to be conceived or to be experienced? To be processed as information of to be 'information', or something else, lived-through sound in
space?

Both. The creation process is really special, but it becomes so much more real when I get to share it with people. This is my debut album, so this realization is really pregnant with me now.

06: Is listening connected with obedience? To 'actively' listen means to obey?

I dont subscribe to that sort of old school audience performer dynamic; we live in a different era, where interactivity is all around us. I think if you do something that is interesting, then you can capture ppls attention and they will listen- I’m not really sure who is controlling who there. I don’t think of composers as alchemists, it is a person taking part in a cultural conversation that certainly does not happen in a vacuum.

06: When did you get the first hints about your inclination towards music?

I began writing songs when I was really young for a fake feminist radio station that my friend Alice and I had. We made cassettes with interviews, commercials and pop songs for Women’s Radio. My parents were always singing around the house; music was a big part of the church I grew up in as well.

06: Were/are your parents related to music? What is/was their profession?

Oh, I got ahead of myself there. My mom was a school teacher and then became a homemaker. My dad is a lawyer and a preacher. They are both fun loving individuals who sing and dance around the house. My mom is a little tone deaf, but sings really loud anyways. My dad can carry a tune and sings a lot of old soul and beach beat.

06 :Do you take under consideration other's peoples opinions?

I would be lying if I said I did not. I made a lot of bad music before this release and luckily I had people in my life who were able to encourage me to keep trying, but also didnt lie and tell me it was great. I also studied music, so that would be pointless if I was not at least considering my mentors opinions.

06: Through which processes did you make the 'CAR' recording on ThirdSex in Chicago, and what do you think is the connection between enjoying music and being in motion?

I asked Philipp, who runs the label, to ask his newsletter where they listen to tapes. The majority answered that they listen in their cars. I wanted to make something specifically for the label, so this made the most sense. It was a really fun project to delve into. I did field recordings while driving (not the safest thing in the world) I researched resonant frequencies of cars, etc It took me in directions that I never would normally go.

06: Why does music concern and interest so many people?

It is inherently captivating. It's an overused reference, but Jacques Attali wrote "Music is prophecy. Its styles and economic organization are ahead of the rest of society because it explores, much faster than material reality can, the entire range of possibilities in a given code. It makes audible the new world that will gradually become visible, that will impose itself and regulate the order of things; it is not only the image of things, but the transcending of the everyday, the herald of the future". That resonates a lot with me. Take the bus in any major city and hear the future unfold around you.

06: To know a woman well somebody has to know well her father?

That sounds pretty arcane to me. I dont see what the personality of a parent of one gender over another has to do with this. People are influenced by the folks that they grow up around, whether that be two moms, two dads, one mom, etc.

06: Have you ever been jealous of the work of another?

Jealous is a negative word. I have been impressed and inspired by other ppl work for sure; I’m pretty sure  I started making music, because of all the amazing music that came before me. I can get disappointed when something that deosn’t warrant attention gets too much attention because of extraneous actors, ie wealth, gender, race, nepotism

06: Is there something that causes you sorrow now?

06: Have you understood what is the reason of the existence of art in our lives?

06: Is there someone that you would like to meet if you could?