Dimitris KU Papadatos Interview for 06:00am 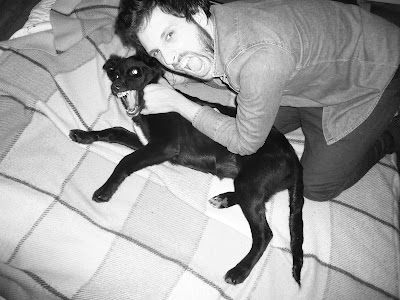 06: What is your parents profession? Can you describe the environment in which you grew up?

My mother is a travel agent and my father is a computer programmer who later became a farmer. I grew up with my mother and sister around the southern suburbs of Athens.Very close to the sea, so that I could always get the big picture just by looking at the waves. I went to a public school, and every Sunday we would gather at my classmate’s house and watch all episodes of Nightmare On Elm Str in a row.
I was also a boyscout. I guess I still am since one is always put under the oath.

06: Had you ever wished that you had invented something massive like the blue jeans?
I always wished I had composed Springsteen’s 'Thunder Road' which kind of answers your question.

06: Has your music influenced your parents?

06: Where do you like to usually walk your dog?

I take Daria almost everywhere I go if it’s in a walking distance. She likes the park close to our house cause all her dogfriends are there.
I like mt Penteli but only on sunny days.

06: What book(s) are you currently reading?

I am re-visiting Brian Michael Bendis’ “POWERS” series, just started Hillel Schwartz’s “THE CULTURE OF THE COPY” and finishing “EVERYBODY LOVES OUR TOWN” by Mark Yarm.

06: Why do you thank Kariofyllia Karambeti in the credits section of your new album Feathers as KU?

Because she taught me that everyone should get paid for their work, and proved it in action and on her own private expense. Plus she gave me some more great piece of advice.

My new album was released on 12’’ + free CD via Inner Ear Records on the 26th of March. The name is Feathers and it consists of 9 songs. The duration is almost 38 minutes. The music and lyrics are mine except where specified on the liner notes. It was recorded on the summer of 2012. It was produced by Prins Obi. My wife is on the cover.

I identify with every art movement there was, is and will be, except action painting.
It makes me sick in the stomach.

I have a secret Mimi Parker obsession.

A neck ready to be kissed.

06: Do you consider yourself to be talented?

Yes, of course. My greatest talent is memorizing telephone numbers.

06: If you owned a billboard what would you have on it?

It would be a Felix Gonzales Torres.

06: Do you believe that love can overthrow everything?

06: Would you ever decide to go on an island where all your desires could be fulfilled with the risk that you might never ever be able to return?

Why would I want to leave in the first place if I knew I would want to return? So yes.
My father left for an island and he never returned to the city. I envy him.

06: What features of contemporary Greeks quiet you the most?

If you mean what leaves me speechless, I have to go with the fact that greek society keeps repeating old mistakes and does that in the worst possible ways.

06: If the world is both overpopulated and underfed why are we opposed to cannibalism?

Because the mind is a terrible thing to taste, according to Al Yourgensen at least. Never say never though.

06: What was the most significant encounter in your life?

Meeting my wife definitely. She made me look at the world in its real proportions and this was the most important gift life had to give me.

Your blog so inspiring for me. Thanks for sharing knowledge.