Felix Kubin interview for 06:00am 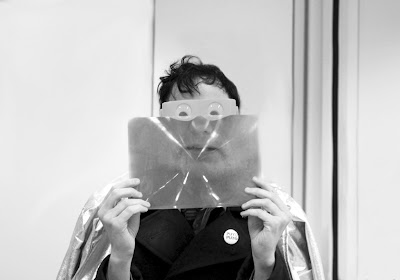 06: A definition of yourself.

I am an early reflection.

06: If we don't act with immediacy, capitalism will become our executioner?

It’s the other way round. Capitalism forces us to act faster than we can think and consume more than we can swallow. It compresses time so much that there is no contemplation in work, no time to let the particles settle that were thrown on the surface of the water. Life needs time. Art needs time. Love needs time. We have to claim back time and public space. Also, capitalism doesn’t judge the inner quality of things, it only judges their immediate sales value. In its most perverted (or maybe purest) form, capitalism means earning money with money. This is incest and it leads nowhere.

06: Free time is something we have to work for?

We have to buy free time, unless we decide to drop out of the (working) society and become hermits. Some people do that, and they are courageous. I am not a hippie, though. I like taxis, modern buildings, vacuum cleaners and elevators. I want to live in a modern world but detached from ist daily rhythm, more like a ghost.

06: Why did Orpheus turn and look at Euridice just before the exit?

In my radio play version „Orphée Mécanique“ he didn’t look back. Actually, he entered the underworld without finding Eura (he only found her projection). And after he left Hades, he forgot where he was, so he entered again. But in the original version he turned around because he heard no sound behind him. We need sound for evidence. When I saw my dead father lying on the floor, his silence was much more horrifying than the way he looked.

When the economy gets bad and people have to struggle with poverty, right wing (or extremist) parties always get strong. That seems to be a phenomenon of history. Of course, the situation in Hungary and Greece worries me. But most of all I am worried about Russia. It seems that they are light years away from Glasnost and Perestroika.

06: Are radio transmissions today as important as they were in the past? In which ways?

Transmissions are always important! Let’s just forget about commercial radio for a second. I think that the ideal of radio has become more important than ever. For me, radio can be a synonym for quality journalism, in-depth features, radio plays, alternative music programmes and experimentation with transmission in general. Of course, hardly anyone listens to radio by antenna nowadays, only people in cars do that. We mostly listen by internet and usually turn on the radio randomly. We don’t care about the programme schedule. There are some decent radio programmes on internet but most of them lack something that public radio has: money. At the end of the day, you need to pay a radio maker, so (s)he can take time to make a good research. You need to pay the staff of a radio play production: the author, the director, the musician, the actors and so forth. And you need to pay the moderator, so he can prepare for the programme. All of these paid people shall not be controlled by a private company that is only interested in sales figures. They shall be paid for work that is serving public interest, education and a free spirit of culture. Having said that, the democratization of internet has produced a lot of blogs and mini radio stations with some brilliant perls amongst them. But on the long run I really believe that it’s necessary to be paid for quality work, at least if you want to keep a sustainability. This counts for artists and musicians, too. Otherwise it stays a hobby.

06: What has been your experience working with Christoph Schlingensief like?

I had met him few times 10 years ago. Back then, I only compiled some classical music for his theatre play „Atta Atta“, so I wasn’t involved too much in the creation of the play. Few years ago, he wanted me to compose music for his play „Eine Kirche der Angst vor dem Fremden in mir“ („a church of fear of the alien in me“ – actually, the title is hard to translate). But his request came too short in advance of the rehearsals, I couldn’t do it. I think, one year later he died. I always liked his ability to bring people together and create a riot or protest. I liked his interfering with public spaces. He wasn’t afraid of any confrontation. However, I didn’t like his aesthetics very much. He was more an instigator than an artist to me.

06: Can you describe what has been in your life your relationship with the dancefloor.

I have no special relation to dancefloors. Dancefloors mostly create reproduction. They are as much overrated as DJs. I like the idea of a club that creates world, surprising, surreal and independent from the outer world. It needs a lot of creative audience to achieve that, no consumers. I don’t like DJs who play only one style of music and only care about how they can please the crowd. They should rather go into politics then. Parliaments should be dancefloors, DJs should be conductors, dancefloors should be auditoriums.

06: What would you like to do in the future?

I want to work with foley artists and create a composition for a cursing choir.

06: Can you send us a picture of you, of a place or of something else that best illustrates your current state of mind?

I attached a foto that Evelyna Domnitch took of me in Amsterdam in her sci-fi lab.

Many times people don't believe me when I tell them about how much money you can get by taking paid surveys online...

So I took a video of myself actually getting paid $500 for taking paid surveys to set the record straight.